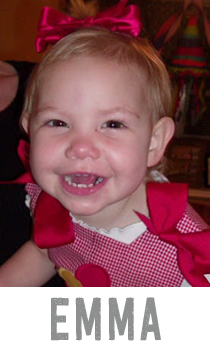 ​Emma is Kelvin and Christy Dunnam's third child. At 18 months old, she began losing milestones. Doctors diagnosed her in July 2008 with a degenerative neurological condition known as Batten Disease. Patients with Batten Disease lose their cognitive and motor skills, are associated with variable yet progressive symptoms including seizures, dementia, vision loss, and/or cerebral atrophy and show an average life span of five years. Emma lost her battle with Batten Disease February 1, 2010.

After spending significant amounts of time at MD Anderson Cancer Center with Kelvin's father, the Dunnams understood how quickly parking costs escalate. As Mr. Dunnam left the hospital one day, a stranger paid his parking. This stranger's random act of kindness planted the seed for Emma's Hugs. After Emma's diagnosis, the Dunnams knew they wanted to do something to honor their daughter. Kelvin remembered the stranger's random act of kindness, and Emma's Hugs was founded.

There was a special time in Emma's life, when she gave hugs and kisses. She even met her daddy at the door a few times, said "Dada" and gave him a hug. Through Emma's Hugs we hope to memorialize that time in Emma's life and to share the spirit of a simple hug from a small child. 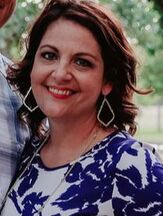 ​Jenny Royer, Executive Director, is a native Texan. She recently joined Emma's Hugs and looks forward to spreading hugs to those in need in the Houston Medical Center. Jenny is a graduate of Lamar University - Beaumont with a bachelors of science in Elementary Education. Jenny has been a fourth grade teacher for 19 years, with 11 of those years being in Barbers Hill. She is married to her husband, Cody for almost 20 years. She is a mom to FIVE teenagers! She is an active member of Second Baytown and loves going to the beach, painting, reading, and traveling with her husband.​

The Board is currently comprised of its founders Kelvin L. Dunnam and Christy M. Dunnam, as well as Dian Rosier, Brenda Scoby Nikirk, Wayne Guest, Amy Shugart, Emily Claassen, Gary Norman and Ronnie Anderson. The Board will structure fundraising events and coordinate volunteers to disperse gifts. Additional Board members will be added as needed. No one on the Board is compensated financially.

Brenda Scoby Nikirk, president, came to Texas in 1966 to attend Southern Bible College. She met her husband, Terry there and earned a degree in Christian Education. After spending several years teaching, Brenda opened a small awards business and was surprised when it was profitable for 19 years. In 2001, she and Terry sold the business and moved to Baytown. Brenda intended to return to education as a substitute teacher, but discovered volunteer work and never looked back. She served as president for six years on the board of Christian Women's Job Corps of Greater Baytown. Brenda is currently a mentor for the Second Baytown MOPS (Mothers of Preschoolers) group. She and Terry have two sons and nine perfect grandchildren. In her spare time, she is an avid reader, serves as the family genealogist, and enjoys traveling with family.

​Kelvin Dunnam, treasurer, is originally from Baytown, Texas, but he and his family now call Ohio home. Kelvin is a graduate of the University of Houston Downtown with a bachelor of business administration in supply chain management. He began his career with the Lubrizol Corporation in 1990 and is currently a dispersant strategic planner. In addition, he is a past board member for the Pregnancy Resource Center East and Personnel Committee board member at Second Baptist, Baytown. Kelvin enjoys spending time with his family and is an avid hunter.
​​
​Christy Dunnam, vice president, was also raised in Baytown, Texas, and loves the beautiful seasons at her new home in Ohio. She is a graduate of Houston Baptist University with a major in music education. She taught choir and music at the secondary and elementary school levels and has recently changed her career path and joined the corporate scene with Tremco, Inc., as a training coordinator. The Dunnams enjoy sharing their love of the outdoors with their three beautiful children.

​Dian Rosier, secretary, is a lifelong Baytown resident. After graduating from Ross S. Sterling High School and Lee College, she operated a successful child care center. In 1999 she began a career with Continental Airlines, and was fortunate to travel extensively during her tenure there. Now retired from the airline business, she works as a telecommunicator with the City of Baytown, Texas. An advocate for the unborn, Dian also has served on the board of directors for Baytown's Resource Pregnancy Center. In addition, she is an active member of Second Baptist church where she enjoys being part of the worship arts ministry.

​
​Wayne Guest is a lifelong resident of Baytown, Texas. He graduated from Lamar University with a bachelor of science in engineering. Wayne married Becky Phelps in 1974 and they have two children, Michael and Sarah Guest Haney and their spouses, Mandy and JoJo respectively. Wayne and Becky have 5 grandchildren: Maddie/Matthew Guest and Levi/Parker Jo/Layne Haney.
Wayne retired from ExxonMobil in January 2016 after 15 years of ex-pat assignments.
Wayne is an active member of Second Baptist Church in Baytown.

As many women do, Amy Shugart wears a lot of hats in this life. She is a working mother to three busy teenagers: Sydney, Seth and Sam. She considers it a wonderful blessing to have been able to stay at home with them until recently. Amy says, "I have had to be more selective with my volunteering and what I devote my time to since returning to work. We are very active members in our church, Cedar Bayou Grace, and I feel that my spiritual gift from God is one of service. I love to be involved helping others and sharing God’s love.  Serving on the board for Emma’s Hugs is one of the volunteer hats that I cherish the most. From the moment that God planted the seed of this wonderful organization, it has been about one simple gesture and how far that gesture can spread love and hope. Sweet Emma, Emma’s Hugs, and its founders are dear to my heart, and I am honored to serve on this board."

Ronnie Anderson is a semi-retired Executive VP with Community Resource Credit Union. He continues to work for the credit union in legislative affairs and the political representation of the credit union industry, dealing with local, state and federal legislators in Austin and Washington, D.C. Ronnie is a former city councilman and Mayor Pro Tem for the City of Baytown and a founding member of the Crisis Pregnancy Center aka Pregnancy Resource Center. Ronnie has served on numerous local boards including Civil Service Commissioner, Baytown Municipal Development District, Rotary Club of Baytown, YMCA, and Baytown bond committee. He was the ExxonMobil Refiner of the year in 2012 for outstanding community service. Ronnie is currently serving on the Baytown-West Chambers Economic Development Foundation board as the immediate past Chairman of the Board, and VP and executive board for the San Jacinto River Authority. Ronnie is married to Barbara who is retired from ExxonMobil. They have two children, Lori, a teacher with Barbers Hill ISD, and Brian, self employed as a commercial and residential builder/contractor. They also have five grandchildren.